We are happy to announce the release of GrowthRates 6.1, which includes several improvements to our flagship product.

The GrowthRates program has received worldwide attention for its ability to streamline the analysis of data output from a range of microtiter plate reader models, often reducing days of effort to less than 30 seconds, with no programming required.

GrowthRates 6.1 introduces two new improvements that give you more options for running your growth rate experiments.

GrowthRates 6.1 introduces a new optional algorithm, the stringent algorithm, for identifying the optimal time points to calculate the growth rate. The algorithm used by previous versions of GrowthRates is the relaxed algorithm and is invoked by the -r command-line option in GrowthRates 6.1.

The old, relaxed algorithm seeks the time points that give the highest exponential growth rate, considering the correlation coefficient R for the fit to those points. For most data sets that algorithm works very well, but occasionally scatter in the data, especially when ODs are barely above the background OD, results in an artefactually high growth rate that does not reflect the growth rate during the true exponential phase. Those artefactual growth rates almost always have unacceptably low R values, indicative of unreliable growth parameters. To address that problem, we have implemented a new algorithm, the stringent algorithm.

We consider 0.99 to be the minimum R value for reliable growth rates. When R < 0.99 the summary file puts a warning next to the values for that well ” Warning! R is < 0.99.  GrowthRate may be unreliable!” When there is a systematic issue with the data that leads most wells to have R < 0.99 it can be distracting to have that warning on every line, especially if most of those wells have R only slightly below 0.99.  GrowthRates 6.1 now includes the -m option which allows the user to set the cutoff for a warning to a lower value. The command line option -m 0.98 would set the cutoff so that the warning only appears if R ≤ 0.98.

About Calibrating Your Plate Reader

To learn more about GrowthRates, read the educational articles on our Support page, then take the next step in saving your lab valuable research time—purchase a license in our Shop. 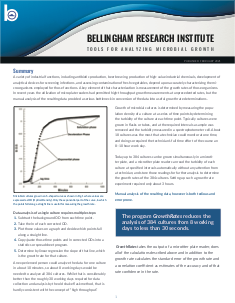